You are here: Home1 / Chart of the Week2 / Top 10 Wealthiest Countries in Africa

Mauritius has the highest per capita wealth of any country in Africa as shown in the left-most bar chart.  At $32,700 its more than double South Africa and Namibia where it is between $12 and $13,000.  The other top 10 countries all have per capita wealth of under $10,000.  The data for these charts are from New World Wealth and are in the Africa Wealth Report 2018.

Among African countries, Mauritius also experienced the highest growth in wealth over the decade 2007-2017 (see middle chart).  Its wealth grew 195%.  Kenya had the second highest growth at 73%.  South Africa and Egypt trailed the other top 10 with growth of 2% and -10%, respectively.

With their large populations, South Africa and Egypt led the other African countries in total wealth, as shown in the right-most chart. Mauritius total wealth of only $41B is less than one tenth South Africa's $740B. 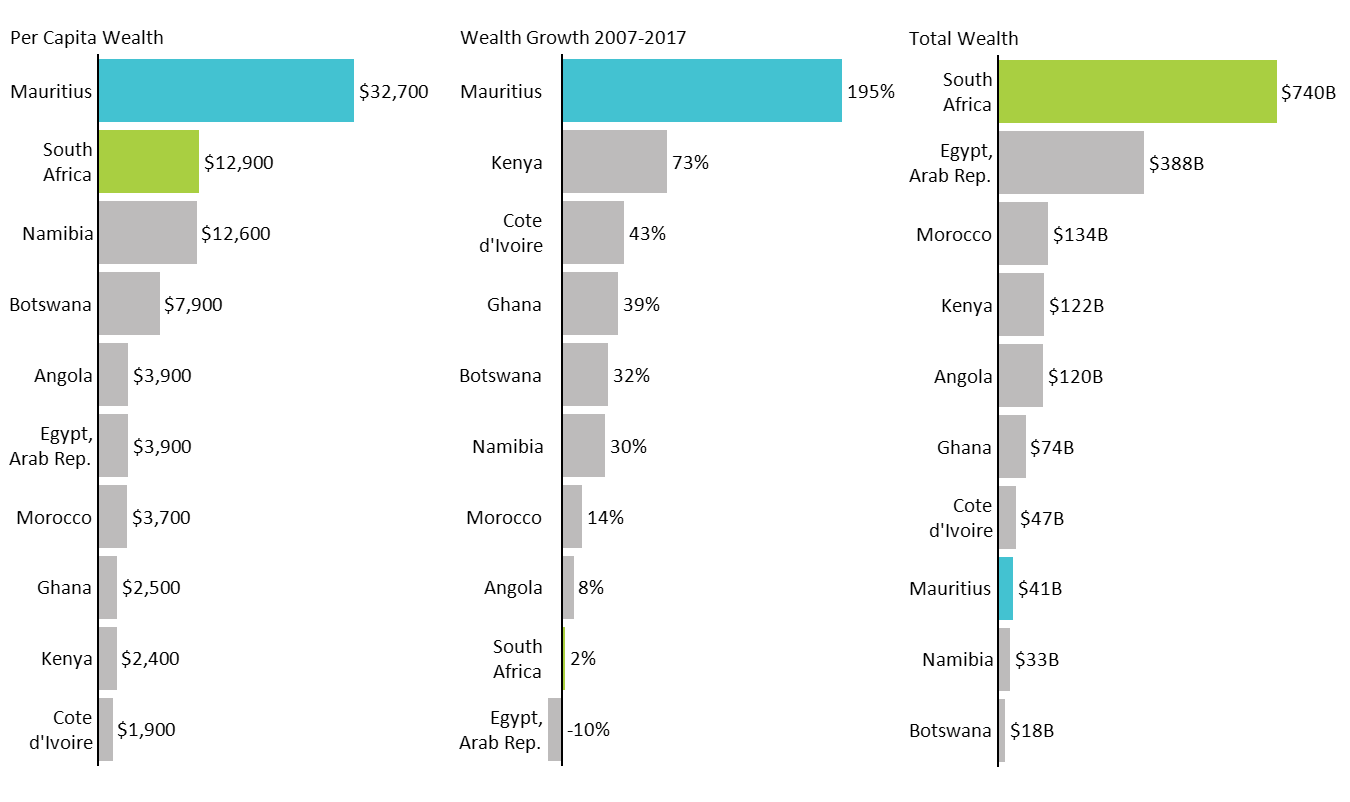 How I Made These Africa Wealth by Country Horizontal Bar Charts

I tried a few different representations for this data before settling on the three horizontal bar charts.  I first tried a bar mekko with bar heights set to growth and width to per capita wealth.  I then tried a bubble chart with per capita wealth and wealth growth as x and y axes and population as bubble size.  Most of the bubbles in the chart overlapped and Mauritius was smaller and off by itself in the upper right.  Neither representation showed the message I wanted to deliver, which was that Mauritius was by far and away the most wealthy country in Africa per capita and it experienced the highest growth over the last decade to reach its current status.  Secondarily, I wanted to show that its total wealth was still relatively small when compared to larger countries like South Africa and Egypt. If you're struggling to select the right chart for your data, check out the Mastering Chart Selection presentation.

Here are the steps to make these charts:

Take These Charts and Make Them Your Own

Download these charts and edit them using Mekko Graphics. See more bar charts in our chart gallery. Here are some other charts that may be of interest to you: